“Peter’s inspirational writing and sketches, that reveal his life threatening experiences, will affect and move you. Both adults and youngsters will enjoy this book. It is engaging and will be remembered for a long time. Don’t miss it.”
—Claude Marsilia, Boston Post Gazette

Peter’s Big Heart is the touching story of a young boy who must endure serious heart surgery when he is just ten years old. With endearing and personal artwork, Peter McLaughlin recalls the story from his own childhood with warmth and tenderness, detailing his interaction with nurses, doctors, and surgeons that helped him along the way.

His triumphant story appeals to children of all ages, and serves as an inspiration to those facing heart disease or serious medical conditions. With a strong foundation from his family, as well as some humor and love from his best friend Rufus, Peter discovers that his heart is truly strong because it is full of love.

Peter McLaughlin was born in 1963 in Boston, Massachusetts. He was diagnosed with a hole in his heart, called a heart murmur, and a very slow heartbeat. When Peter was 10 years old he underwent heart surgery at Boston Children’s Hospital. The doctors repaired the hole in his heart and implanted a pacemaker to keep his heart rate up. That summer, the local television station, WGBH, called and asked him to be on the children’s program ZOOM, to talk about his surgery and his pacemaker.

Despite such serious surgery, Peter lived a normal, active life afterwards. He graduated from the University of Massachusetts Amherst with a bachelor’s degree, and then went on to Boston College to receive his master’s degree in social work.

However, tragedy struck yet again when at the age of 27, Peter had a massive stroke. He had been right-handed, and was unable to move his right leg or arm. After months of rehabilitation, he returned to his childhood home to live with his mother and stepfather. During this time, Peter began drawing with his left hand, sitting for days with a pad of paper and a pencil in front of the window.

On Christmas Day, he presented his mother with a pencil drawing of the flowers on the windowsill. Peter entered a watercolor, featuring his good pal Rufus, into an art contest at Topsfield Fair, and out of hundreds of entries, took second place.

Peter then began drawing note cards and calendars, which he sold, and eventually began creating the art that became his first children’s book. 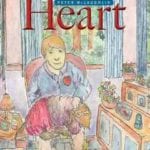