Winner of the “Independent Publishers of New England” book award

“…You have some excellent sharp-tongued repartee among the characters … very enjoyable (p. 190). An unattractive man with two beautiful women is bound to draw attention. Great line (p. 191). All in all, you have created a well-crafted mystery. Your prose is clear and fluid, and you have an excellent ear for dialogue….”
—Writer’s Digest, Self-Published Book Awards

Joe Nelson is a pediatrician in Eastern Kentucky being sued for malpractice involving the death of a four-year-old girl. The child was the niece of the wealthiest man in town, and the trial is not going well.

Then it gets worse. While sitting in his car outside his lawyer’s office, someone shoots at Joe. The police seem convinced that he has faked the shooting, especially since the shot was fired with his own gun.

The next day in court, Joe realizes that his patient’s death was not an accident or malpractice, it was murder. When one of the plaintiffs is murdered, Joe becomes the prime suspect. He must use all of his medical knowledge and deductive reasoning to solve the crime—and save his own life.

Paul Janson spent five years practicing as a physician in the coal mining, Appalachian region of Eastern Kentucky.  He now lives on a small farm in rural Massachusetts with his wife and children and practices medicine in an emergency department.  He is the author of a children’s picture book about the adoption of his two daughters. Mal Practice is his first published novel. 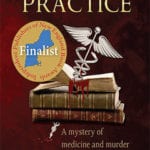