Why We LOVE this Series!

“The series encourages children to explore and dream”
“The stories are engaging for parents and children”
“The illustrations are fun and colorful”
“The author uses a wonderful rhyme in her writing style”
“Reminds of us classic Seuss”
“Leaves you wanting to go on Josh’s next adventure”
—Mom-Spot.com

Commander Josh is back in Explorations of Commander Josh, Book Two: In Tahiti! And this time, he’s sailing on the high seas. Using his colorful imagination, ideas from his favorite travel shows (and a little help from his mom’s laundry basket), Josh makes his way across the South Pacific to the tropical land of Tahiti!

From Story Monster Approved and Purple Dragonfly award-winning author Donna LeBlanc, Explorations of Commander Josh Book Two: “In Tahiti” allows readers to sail along with Josh on his latest adventure as he discovers the lush and exotic Society Islands, maneuvers across the beautiful waters … and tries not to run aground!

As a child, Donna LeBlanc always had dreamed of becoming a teacher. And as a piano instructor for the past two decades, she has achieved her dream. She also studied music and musical theatre, became a wife, worked in corporate America, served as a mentor and as a children’s choir director, and created her own business in faux finishing and interior decorating. In 2009, Donna began writing children’s poetry. When she is not inspiring her students and finding new destinations for Commander Josh, Donna is managing her decorating business, and volunteering her time for Habitat for Humanity and with “Book Friends” of the beautiful Beekley Library in New Hartford, Connecticut.

Donna currently resides in New Hartford with her husband, her brother, and two dog daughters, Sophie and Rosa. Donna says, “It’s so much fun to dream! I hope to inspire others to do the same. You just never know when your dreams may come true!”

Anton Servetnik was born and raised in Tallinn, the capital of Estonia, where his love for art began with American cartoons and Japanese artwork. Anton still has some of his early drawings he created as a toddler! Like Josh, Anton loves to travel. He has studied in the United Kingdom, Japan, and the United States. He has had his own adventures in Eastern Europe, Russia, Sweden, Finland, Egypt, Turkey, Germany, Italy, Spain, France, and Southeast Asia. His time abroad has allowed many different cultures to seep into his art. He hopes to become a successful animator and illustrator, and to share his art with everyone in the world. 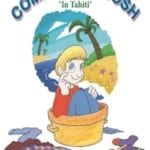