Escape into the Mall

Why We Love This Book!

“Teaches a great lesson about trying new things but also about being safe”
“Adorable character even though it’s a green ball – great facial expressions”
“Fun pictures that enhance the story”
“Great book to read-aloud with a single child or a group”
—Mom-Spot.com

On a regular day, in a regular mall, one little green ball gets an extraordinary chance escape into the mall to investigate a world he’d only viewed from his shelf in the toy store.

With great wit and humor, Donna LeBlanc, author of the “Story Monster Approved” and multiple award-winning Explorations of Commander Josh series, has our little green hero dodging shopper’s feet and discovering all the delights—and daring—of a busy shopping mall. Like many little readers, he soon discovers that there is no place like his home in the toy store.

After years of working in corporate America, Donna LeBlanc branched out and created her own business in faux finishing and interior decorating. One of Donna’s dreams was to become a teacher, which came to fruition two decades ago. “Miss Donna,” as she is lovingly referred to by her students, continues to teach piano to children of all ages.

Her love of children, her child-at-heart attitude, and her ability to inspire were the catalysts for her becoming a writer. Reading always was an integral part of Donna’s life as a child, and her favorite authors inspired her to use her own imagination. In 2009, Donna put that imagination to use and began to write children’s poetry.

While sitting at the food court one day at the mall, Donna noticed a crumpled piece of paper being kicked around. Not one person was aware of this piece of paper, although many came in contact with it. “I bet it wishes it never dropped out of someone’s pocket,” she smiled to herself. At that moment, a stroller passed by with a child holding a green-and-blue ball. And that was when the idea for Escape into the Mall came into being.

In addition to teaching, painting, decorating, and writing, Donna finds time to volunteer for Habitat for Humanity, for school and town events, and the Friends of Beekley Library in New Hartford, CT.

Anton Servetnik was born and raised in Tallinn, the capital of Estonia, where his love for art began with American cartoons and Japanese artwork. Anton still has some of his early drawings he created as a toddler! Anton has studied in the United Kingdom, Japan, and the United States. He has had his own adventures in Eastern Europe, Russia, Sweden, Finland, Egypt, Turkey, Germany, Italy, Spain, France, and Southeast Asia. His time abroad has allowed many different cultures to seep into his art. He hopes to become a successful animator and illustrator. 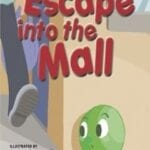