Chasing Blood Money: The Anatomy of Gun Control in America

Chronicling the worst mass shootings that have occurred since Heller, which opened the door for the murderous-minded to have access to military style assault weapons, often with less oversight than is required for having a driver’s license.

David Nelson began collecting news clippings and Supreme Court opinions related to gun violence back in 2008 when the Heller decision mandated a private right to bear arms. An attorney by trade, Nelson did not think Heller or the subsequent McDonald ruling that extended Heller to the states, were wise or what the Founding Fathers ever intended. Over the years he continued collecting newspaper articles of mass shootings and assembling court decisions. After the slaughter during a country music festival in Las Vegas in October 2017, Nelson could no longer stay silent and was compelled to write a book to help people understand the politics behind our current guns laws and to offer possible solutions to finally achieve common sense gun regulations.

Chasing Blood Money begins by chronicling the worst mass shootings that have occurred since Heller, which opened the door for the murderous-minded to have access to military style assault weapons, often with less oversight than is required for having a driver’s license. From there Nelson explains America’s unique history with guns and identifies cultural forces that have made the United States an outlier in the Western world when it comes to gun control—or in our case, the lack thereof. He provides numerous examples how guns have changed the course of our history through assassinations—eight out of forty-five presidents have been killed, wounded, or shot at—and other gun-based violence while also changing us as a society as citizens grapple with inner-city murder rates, domestic violence killings, and school shootings—all exacerbated by a lack of gun control and gun access oversight.

The book provides a detailed history on judicial precedent regarding gun control from the ratification of the Constitution in 1788 to 2008, followed by an analysis of the confounding and controversial Heller decision and its deadly consequences along with an examination of McDonald. One thing is inarguable; since the Heller decision, what was once a rare occurrence—mass shootings—have become almost weekly news. And what were once safe havens—schools and places of worship—have become ever more popular targets.

This book also provides a look at existing state and federal statutes then explains Congress’s potential legislative authority to pursue gun regulation based on its constitutional commerce and militia powers. So if Congress has the power to better regulate guns, why doesn’t it? Chasing Blood Money gets to the heart of gun politics with an in-depth discussion on the powerful NRA gun lobby and how the Citizens United decisions made it easier for lobbyists to buy congressional votes through unlimited political donations. And few industries have bought the loyalty of more politicians than the NRA. Finally, the book closes with several detailed suggestions on how we can implement sensible gun control so Americans can take back their streets, schools, and neighborhoods from the reign of gun terror currently gripping the United States.

David L. Nelson was raised in Michigan’s Upper Peninsula where hunting and target shooting are a way of life. He learned to shoot at an early age and listened to claims that the Second Amendment protected an individual’s right to bear arms even before the Supreme Court declared that was the law.

After graduating from Northern Michigan University, he earned a juris doctor degree from the University of Michigan Law School in 1957. He is a member of the Michigan Bar Association and was accepted to the bar of the United States Supreme Court in 1973. He practiced law for more than forty years, specializing in commercial litigation before retiring in 2001. He is the author of two books: Tool Marks Don’t Lie and River of Iron. 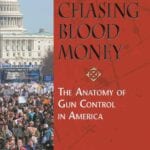 Chasing Blood Money: The Anatomy of Gun Control in America
$13.95