Buried Code is a riveting, suspenseful page-turner with twists and turns and a shocking conclusion that are hallmarks of JP Farrell novels, which include The Common Cure and the Slip of the Hand trilogy.

He’s an artificial intelligence savant with a secret. He’s a special agent involved in a trafficking ring case. An unspoken alliance evolves as their lives cross, but can they stay alive long enough to expose a deeply rooted government conspiracy?

When nine-year-old Cole stumbles upon an alien spacecraft buried on his father’s farm, he does not know how it will change his life. Confiscated by the government as a failed experimental military aircraft, the incident is silenced and believed to be contained.

Years later, Cole finds the damaged remnants of a highly sophisticated alien humanoid that was missed by the government in their search. Studying the extraterrestrial technology, he hones his skills as an artificial intelligence mastermind and is recruited by a robotics tech giant for his genius. Soon, however, he stumbles on the company’s involvement in a diabolical plot that reaches into the highest levels of the US Government. With nobody to trust and nowhere to turn, Cole is forced to work with a DOD agent to bring down the people responsible. The alliance, however, could cost him everything‑including his life.

Wyatt is an FBI Special Agent hunting down a human trafficking ring. Following a lead, he discovers that one of the missing women has ties to the tech giant where Cole works.

Working independently, Cole and Wyatt discover that the company is ground zero for a heinous, deep-state plot put in play by a cabal of powerful capitalists who will stop at nothing to accomplish their mission. Can either of them stay alive long enough to expose the conspiracy and bring the perpetrators to justice?

Buried Code is the first in a 2-book series. A high-octane, suspenseful page-turner that will have you riveted to your seat from page one. With twists and turns that you will not see coming, this sci-fi techno-thriller is perfect for suspense, thriller, and conspiracy book lovers who enjoy shocking conclusions.

Order your copy now and get ready for a mind-blowing adventure.

Other Novels by J.P. Farrell

– The Common Cure
– Slip of the Hand Trilogy 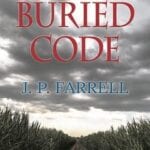