American Banking Through Crises and Consolidation

*Shipping rates vary depending upon location and weight

For 9 or less add to the cart below.

Six weeks in the autumn of 2008 dramatically changed the direction and structure of American banking by taking size and consolidation to a new level that few fully yet understand.

Like in all financial crises an inevitable result is the big banks get bigger and the number of banks fewer. In this case, four commercial banks — JPMorgan, Bank of America, Citigroup and Wells Fargo — were left with 50 percent of all commercial bank assets with smallest of the four having more assets than the next five combined.

This, though, was only part of the story as these banks also used the crisis to cross industry lines and become leading investment banks as well as commercial banks and in doing so, left almost all privately-owned foreign banks far behind.

The events of 2008 were the culmination of a 35-year evolution of American banking from a localized industry in the early 1970s to the large bank dominance of today, primarily as the result of three economic crises — the hard times of the 1970s that lasted through 1982, the real estate-driven recession of the late 1980s and early 1990s and the most recent financial debacle. During this period, not only did four banks rise to their position of dominance, the number of commercial and savings banks fell from 20,000 to less than 7,000 — with no end in sight.

This book tells the story of this spectacular change in America’s biggest business in such a short period of time from an insider’s perspective and puts what happened in the last six years in the perspective of a long-term trend that shows no signs of abating.

It is inevitable that the big will continue to get bigger and the number of banks fewer, with the driving force going forward likely to be technology rather than economic crises. This may dismay some, but this has been a natural evolution of an industry that was initially artificially kept by geographic constraints from doing what every other industry has done…to the benefit of America and its status in the world. Unlike autos, steel and so many other businesses, banking is an international business that seems likely to be dominated by American banks into the foreseeable future.

The impact of economic crises and consolidation on banking is something that Arnold G. Danielson witnessed beginning in the early 1970s from inside a bank holding company and from 1977 to 2007 from his firm, Danielson Associates, which was an advisor to banks and thrifts attempting to adjust to a continually changing banking environment.

From 1985 to 2007 he wrote the regional and national Danielson Reports that described what was happening in the industry at the time. In 2007, he published his book, Consolidation of Banking: or How Five Banks Bought 50% of America’s Biggest Business, of which this book is a revision, updated to include the period from 2008 to 2013 and to place a greater emphasis on the impact of economic crises on banking.

Today, Mr. Danielson is retired, and he and his wife, Vivian, split their time between homes in Potomac, Maryland and Nice, France. His time in France and love of history are reflected in a book far removed from banking, A Traveler’s History of Cote d’Azur, published in 2012. 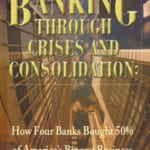 American Banking Through Crises and Consolidation
$18.00